A few people have asked me for some tips on how to go about learning Japanese from scratch, so here they are. This is aimed at people who are in the situation I was in, ie. arrive in Japan, as English teachers (and therefore don't necessarily have to use Japanese for work) knowing little or no Japanese. I'm basically concerned with methods of learning that have worked for me and people I know. Some of this might be a bit obvious, but I haven't included anything unless I know lots of people who don't do it. Some of it might be kind of controversial, and attract disagreement from people who are much better at Japanese than me, and obviously everyone's situation is different blah blah blah. Obviously this isn't the last word on the subject. But having said that I think most of it is pretty universally applicable for not-yet-Japanese-speaking Japan-residents, and feel empowered to write the main points in

The only way to learn a language properly is by osmosis. Unfortunately lots of foreigners in Japan live here for ages and don't osmose anything. We hear Japanese at least eight hours a day. (Unless we work with one of those weird, progressive Japanese teachers who speak English in class.) Every time we turn our heads we see Japanese. If we fall over and miss the buttons in elevators and are good at Braille we can feel Japanese. If we leave any books lying around our apartments for the whole of August we can smell Japanese. Hang on, no, that's the water melon. But you see what I mean. We are constantly exposed to Japanese. But for a lot of people, nothing goes in. Some people can spend two or even three years here, spend most of their time with Japanese people and still be unable to hold a simple conversation.

YOU HAVE TO CHEW OR YOU CAN'T DIGEST.

So what we need to do is to figure out how to make the osmosis process work properly. The problem is that Japanese is so different from English that we don't have enough shared stuff to even start digesting anything. Because there's so little common vocabulary, it's very hard to have even a simple conversation which you can build on until you have learned quite a few words. With a European language, we have enough in common to understand and express quite a lot, and learn more by filling in the gaps with guesses. If you know what the words are, the grammar can be guessed as well. But until we've learned a shitload of Japanese words, we don't have any gaps to fill in. We just hear "Blah blah blah". So to make what we hear digestible, we need to

LEARN A SHITLOAD OF JAPANESE WORDS.

Cramming vocabulary is traditional and uncool and very important. Some dictionaries have lists of common words in the back. These are good, but obviously you have your own unique vocabulary needs. Prepare conversations. (Japanese smalltalk gets pretty predictable...) What we especially need to learn is all the basic conversation fodder which a person can't express their thoughts without, things like "last" and already" and "get up" and "last year". Sadly there are lots of words like this. This is why we need two things. Firstly

I never leave home without my vocabulary notebook. (It's also useful for 'phone numbers and train times, but that's not Japanese-learning, that's Life Skills.) Words need to be vised, revised and re-revised, especially if you're not catching enough of a conversation to understand them when you hear them, so you need a notebook you can take out whenever you have a few minutes to spare. Secondly 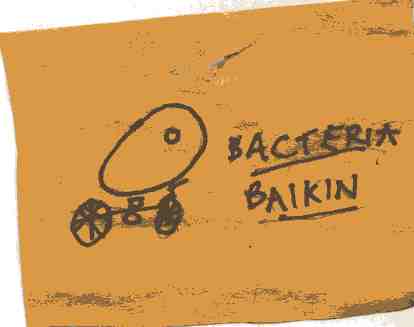 (more like this)
Pretty much everyone uses little memory devices in some way or other, but with Japanese vocabulary they are essential, especially at first, because the words are all just strange collections of syllables without any meaning. If something doesn't mean anything to us we forget it, because it's useless. So we need to invent some connections. Pictures are great. Ideally, draw a memory-assisting picture for every word you want to remember. Then test yourself, and if it hasn't stuck, think of another one. Other people's mnemonics are better than nothing, but your own work best, the more bizarre and twisted the better. And under no circumstances should you throw them away. (I made this mistake.) Or file them, which comes to the same thing. (I made this one too.) Pin them up on your walls. Sellotape them to your friends. Get drunk and hide them from yourself. (That way you will be reminded of them every time you open a book, move a cushion or try to figure out why your cornflakes aren't pouring out of the box in the usual way.)

Making up your own mnemonics is all good, but what we really need to do is to make the component parts of each word make sense in themselves. Japanese vocabulary is very logical. One way to learn the word for "pronunciation" (発音"hatsuon") is to draw a picture of some people pronouncing something while putting their hats(u) on. But it's even more useful to know that "hatsu" 発 means "depart" and "on" 音 means "sound". That way you can connect it with a hatsu-bai 発売 (depart-sell = sale) and on-gaku 音楽 (sound-pleasure = music) and a whole bunch of others. The bad news is that it's not always obvious which sound is connected with which meaning. Japanese suffers from a severe shortage of sounds, so the syllable "sei", say, has about four hundred million squillion different applications. The good news, however, is the Japanese have given us a special pictorial memory-assisting system and daubed mnemonic symbols over the entire country, just for our benefit. These very helpful symbols are: kanji (Chinese characters.)

KANJI WANT TO BE YOUR FRIEND

A lot of people never really try to learn to read Japanese because they get scared by all those squiggles. Alternatively people decide to "concentrate" on listening and speaking. This is a very, very bad idea. Firstly because it's easier to learn a word with the kanji than without. This is a bit strange, because it means it's taking less time to learn more. It's probably something to do with stimulating different parts of the brain or something. Secondly, if you know some or all or the kanji that make up a word, the word stops being a random collection of sounds and becomes a logical(ish) combination of easily-remembered pictures. What's more, knowing a few kanji, and therefore being open to a whole bunch more, doubles the number of orifices through which you can learn Japanese without trying. And since they're everywhere, you hardly need to do any work. Usually the effort in learning a language is remembering things over the long term, but since you see kanji every day whether you like it or not, you can't help being reminded of them the whole time. Don't even wait until you know hiragana and katakana properly. Start now. The secret is to

INTRODUCE YOURSELF TO THE KANJI THAT LIVE IN YOUR NEIGHBOURHOOD AND ALL THEIR FRIENDS AND RELATIONS.

You don't even have to give them omiyage. Look up words you see on signs on the way to work. Look up the names of people you know. (Calling kids by the English translations of their names from the class list - Middle Mountain, etc. - is considered highly amusing in many parts of Tochigi-ken.) Look up the kanji in local place names, and find out which other words they appear in. (This has the added advantage of enlightening you as to where the hell you're going). If you keep seeing them, and they're relevant to you, you'll mostly remember them without trying too hard, but write them in the notebook just in case. Of course, to look them up in the first place you need to

LEARN TO USE A KANJI DICTIONARY.

This can take a bit of getting used to, but it's worth it. If you buy a decent Kanji/ English 漢英 (kan-ei) dictionary it should have instructions for how to use it. Or you can get your students to teach you. It's also good if it has an index based on how often they're used for when you can't find in the usual way. A good alternative/ extra is a pocket-sized electronic dictionary. Everyone seems to use the Canon Wordtank, which costs 15,000-20,000 yen. There are lots of cheaper electronic dictionaries on the market, which may or may not be as good but don't look as cool. Books are available in big bookshops, electronic dictionaries in Akihabara and elsewhere.

If you're reading stuff on the web, you might like to try my vocabulary learning tool, with its built-in dictionary, accessible through a handy bookmarklet. You may want to use it from your mobile phone.

DO SOMETHING ABOUT GRAMMAR. IT DOESN'T REALLY MATTER WHAT. AS LONG AS IT DOESN'T INVOLVE CLAIR'S JAPANESE FOR JETS.

Ordinary, everyday Japanese grammar is very, very easy. And you hear it every day, so it should stick once you've looked at it. Clair's "Japanese for JETs" series make it look far more difficult than it actually is, and should be placed in a sealed metal drum, encased in concrete and buried at the bottom of the radioactive waste repository in Aomori-ken. There are plenty of perfectly good grammar books about. Just use anything that looks simple and logical. Figuring out the grammar rule you have to apply is very easy, although it can be hard to make it stick and remember all those crazy verb endings under pressure, so some drilling is good. I never did this, and I don't know if anyone else does, but why not play some of the grammar games you use to teach English in class to learn Japanese with friends? If you stick to simple grammar points, it'll be hard to get it wrong, so you don't even need a teacher.

None of this takes much time. Even ten minutes of study a day is enough to make the world start to make sense. But lots of study is well worth it, because the more you learn by study, the more you learn naturally. And the faster you learn, the sooner you get that vital critical mass in your stainless-steel bucket. And then things really start fizzing.

back to the index...